skip to main | skip to sidebar

I have, for many years, mused and debated and considered joining (re-joining? Joining. One brief flirtation 20 yrs ago doesn't count) the SCA. (Society for Creative Anachronism, a medieval reenactment group). I've always tended towards that sort of time frame for my preference in dress up, and having a bit of focus towards my flailing and distractible attention is a feature. (Not that approx 1000 yrs of history is all that much focus, but at least it knocks off the last 400 yrs, which is a start.)

As much as this is generally a knitting blog, I'm actually very handwork ADD, and dabble in basically anything once, twice if I like it. I do seem to end up back with sticks and string every time, but I'll still try anything.

Over the weekend, I went to my first SCA event, and I done good in picking it. Kingdom A&S competition. (Kingdom = province wide, A&S = Arts and Sciences.. everything that's not fighting) So people from all over the Kingdom bringing their A game to show off to everyone. Hot /damn/ there are a lot of stunningly talented people. Even better, like handworkers everywhere, if you cornered them and asked them to tell you all about it, they were generally delighted to share their insights and enthusiasm with people who were gawking. (Much like asking a gamer 'tell me about your character', really. Geeks are geeks, be it illumination or Pathfinder.)

I came away wanting to do everything. Lace! Embroidery! Wire! Spinning! Research! Costuming! This is in rather direct contrast with the 2014 promise to myself that I'd finish things that have been hanging about forever. I should institute a one done gets to start something new plan. Fortunately some are non-portable, which makes it easier to know which ones come along in my backpack.

Going to work today is a distinct challenge, I'd rather stay home with my sticks and string, dammit!
Posted by Jazmin at 7:41 a.m. No comments:

I finally took the plunge and dug out my bobbin lace pillow. I've own the supplies for this flavour of lace for ages and ages, and apparently to judge by the scraps of practice work in the little box of bobbins this is my 3rd go at it. (My memory said second, but my memory also didn't remember half the bobbins I own, my memory clearly sucks.)

It's novel to settle in to a technique where using up some of my size 30 cotton is the same as handing a beginning knitter a ball of chunky and 6mm needles. Then again, its starting to feel that way with knitting as well, but I've so damn much of it, I feel as if I really should keep knitting doilies out of the good old size 30 that is legion around here. (And size 10, size 20, size 40.. perhaps there's just a lot of crochet cotton in this house).

Lo and behold, welcome to the bobbin lace equivalent of a garter stitch scarf, complete with knots, bad tension and mismatched threads. (Damn bobbins are pretty though, and you never seem to have enough. That's a dangerous combo for the wallet.) I've decided to just embrace this, and embrace one of my favourite places to find doily patterns, and challenge myself over the next while to knit all of the patterns from a particular site. Yarn Over has translations of a specific Danish site, and I've knit a healthy chunk of them already. I'm aiming to finish off the ones I haven't yet done over the course of this year (possibly and next.. who knows!)

I'm operating on a 'pics or it doesn't count' method here, which I think only is relevant for some of the little ones, which honestly are no big deal to knit again if I can't find a photo.

Lille Rund Serviet - I know I've knit this one, but I can't find a photo.

Mommes Lysedug - Oct 2010 But I can't find a finished picture of it.


Pafuglehale - Not done. I dont even much care for it, but perhaps in a good colour it won't be so bad.

Spiralen - I've knit the hell out of this more times than I can count.

Three and a half big doilies in the queue, and two little ones. Not half bad! Damn I have a lot of doilies. :)
Posted by Jazmin at 2:04 p.m. No comments:

So one shawl, two scarves, three doilies, one pair of socks, seven dishcloths (I did the snowflake one six times) and some random oddness. Not a whole lot of knitting. Some huge projects (Frosted Ferns felt like it took forever), but mostly tiny things. I did, however, spend the whole year in physio with my arm, so I need to be patient with myself on that front.

I already have a project on the finished list for 2013 (a pair of socks that almost got done on the 31st, but not quite), and more clearly to come.

I just don't know what, if any, theme do I want for 2013. Finish up old stuff? (the usual, as I have projects from 2005 and 2006 in my UFO list, clearly I'm bad at it) Accept that there will be a lot of little stuff (or not much little stuff) and go on? Try and start something big and work at it a bit all year? A sweater? A shawl? A blanket? All doilies all the time? All out of stash? (Unlikely, I can already think of a ball or two of worsted I would like to pick up). I suspect I shall muddle along as usual, knitting what catches my attention at the time, plodding along on the ones in progress and generally not having much of a plan.

I found a free pattern for a snowflake dishcloth at Len's Mills on the weekend. (For those not in SW Ontario, Len's Mills Store is kind of like a junk store/craft store mash up. You never know what you'll find, buy it when you see it, because you'll never see it again. The craft side is a bit more consistant.) I don't often crochet, I'm actually fairly spectacularly awful at reading crochet patterns, but once I got the hang of this one (I ripped out one round many times before I came up with something that looked like the picture), this sucker goes by quickly. I forgot how fast crochet is. How effective something with that many holes is for cleaning dishes (or faces), well it's a Christmas novelty. I'm rather pleased with it.

I'll post a photo of my scarf of shame in my next post. Once I swallow my pride enough to admit to having knit it.
Posted by Jazmin at 11:51 a.m. No comments:

When Clapotis burst onto the scene in Fall of 2004 (Knitty that year), it was a huge success. It was /the/ thing to knit. Everyone was making one and more than one. It's got almost 20 THOUSAND projects listed in Ravelry.

And I went 'enh, whatever'.

This time, I had some nice yarn (stash yarn, discontinued, Fiddlesticks Country Silk) I wanted a scarf from. I had a vacation that I wanted something easy to knit that showed off the yarn and not the pattern. Finally Clapotis rose to the top of the queue.

Well now I get the appeal. It's fast, it's easy, it looks awesome. You get to unravel your work and have it just look /good/. Alright, alright, I'm a slow lemming. 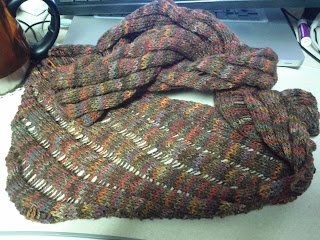 Happy thanksgiving to all who are celebrating it this weekend (and to those who wait for November, consider this a very early Thanksgiving greeting).

I'm grateful for so many things every day, from the way the light highlights a flower, to the birds that come to my feeder, a lovely little house, creativity and knitting and friends and the cats and my best beloved well.. life is good. Life is generally very good.

And right this moment, I'm very thankful for my husband having made me dairy-free pumpkin pie. This girl's got her priorities straight.
Posted by Jazmin at 9:44 a.m. No comments:

Jazmin
I'm a married 40-something IT support person who moonlights as a fibre artist, gamer geek and will generally try anything once. Twice if I like it. I aspire to be a stay at home mom to my two cats someday.